No Apple code was harmed during the production of this utility.
Ever since Mac OS X Server was introduced, Apple have included a DHCP Server. This was and still is based on the open-source bootpd server.
This article is not intended to discuss the purpose of a DHCP server, for that you might want to read http://en.wikipedia.org/wiki/Dhcp.
While the original open-source bootpd server has the capability to define additional fields of information (via DHCP option fields) that can be provided via DHCP to clients, the version included with Mac OS X 10.4.11 Server and earlier did not support this. After several years of my and presumably others submitting requests for this feature, this was finally added to Mac OS X 10.5 Server. The overwhelming majority of router based DHCP servers do not have the ability to define DHCP option fields.
Note: This is a facility Microsoft have provided since at least Windows 2000 Server.
Probably the most common scenario that you would come across that needs DHCP option fields, is the use of a VoIP (Voice over IP) phone system. It was my experience that small to medium enterprises were earlier to adopt this type of phone system than big enterprises, and these smaller organisations are also more likely to use Macs and Mac servers - just like the company I run the IT for in fact.
So, Apple finally introducing the ability to define DHCP option fields in Mac OS X 10.5 Server was good news. Unfortunately, Apple did not and still does not even in OS X 10.8 Mountain Lion Server, provide a user friendly method for defining these values which are stored as Base64 encoded data values in the /etc/bootpd.plist configuration file. Thanks to the efforts of myself and others, the method of generating and encoding values has now been sufficiently deciphered that I am now able to create and provide a simple utility with a graphical user interface that mere mortals can use to generate any required DHCP option field. Here is what it looks like… 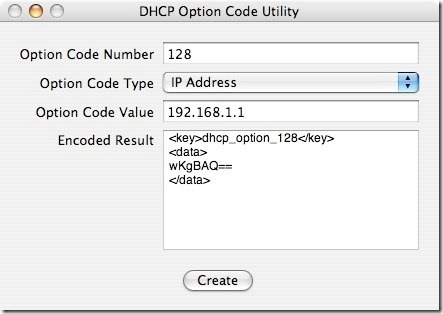 It can be downloaded free of charge from -
DHCP Option Code Utility
If you don’t feel comfortable editing Unix configuration files like /etc/bootpd.plist then I advise you don’t try doing this. If you have not already, I advise reading the Unix man page for “bootpd” on your Mac OS X 10.5, 10.6, 10.7, or 10.8 server. This is done in the Terminal.app by typing “man bootpd”.
Update: DHCP Option Code Utility 1.1 has the following improvements.